Skip to content
Assessment of intellectual impairment, health-related quality of life, and behavioral phenotype in patients with neurotransmitter related disorders: Data from the iNTD registry

Assessment of intellectual impairment, health-related quality of life, and behavioral phenotype in patients with neurotransmitter related disorders: Data from the iNTD registry 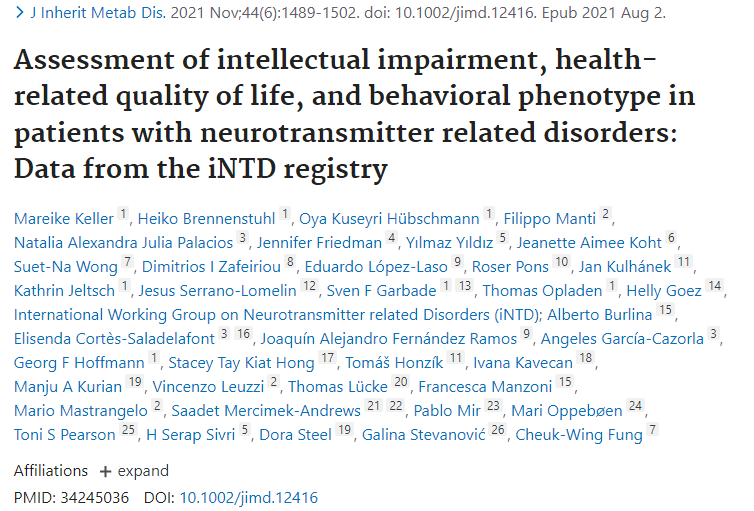 Inherited disorders of neurotransmitter metabolism are a group of rare diseases, which are caused by impaired synthesis, transport, or degradation of neurotransmitters or cofactors and result in various degrees of delayed or impaired psychomotor development. To assess the effect of neurotransmitter deficiencies on intelligence, quality of life, and behavior, the data of 148 patients in the registry of the International Working Group on Neurotransmitter Related Disorders (iNTD) was evaluated using results from standardized age-adjusted tests and questionnaires. Patients with a primary disorder of monoamine metabolism had lower IQ scores (mean IQ 58, range 40-100) within the range of cognitive impairment (<70) compared to patients with a BH4 deficiency (mean IQ 84, range 40-129). Short attention span and distractibility were most frequently mentioned by parents, while patients reported most frequently anxiety and distractibility when asked for behavioral traits. In individuals with succinic semialdehyde dehydrogenase deficiency, self-stimulatory behaviors were commonly reported by parents, whereas in patients with dopamine transporter deficiency, DNAJC12 deficiency, and monoamine oxidase A deficiency, self-injurious or mutilating behaviors have commonly been observed. Phobic fears were increased in patients with 6-pyruvoyltetrahydropterin synthase deficiency, while individuals with sepiapterin reductase deficiency frequently experienced communication and sleep difficulties. Patients with BH4 deficiencies achieved significantly higher quality of life as compared to other groups. This analysis of the iNTD registry data highlights: (a) difference in IQ and subdomains of quality of life between BH4 deficiencies and primary neurotransmitter-related disorders and (b) previously underreported behavioral traits.